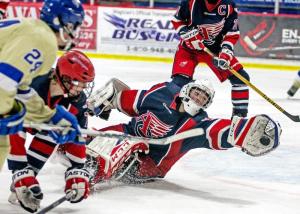 After playing just two games his junior season Marsh got the majority of ice time last season for the Wings playing all but one period of the 25-game season. Posting a 14-9-2 record, Marsh saw an average of 29 shots per game in compiling a .882 save% and 3.39 GAA.

Marsh will join Don Babineau, who has coached in the Robbinsdale program as well as Junior hockey for several years.

“Ethan competes day in and day out. He always gives his team a chance to win,” commented Babineau. “We look forward to Ethan rising to his full potential as a staff. It always starts from the back. He will be a great addition to the Palm Beach Hawks organization.”

Moving on to the next level takes preparation and commitment, something Marsh has had throughout his career. He’s spent the past six years training with Adam Hauser and Pete Samargia, two former NCAA Division I goaltenders at the University of Minnesota.

“My personal goal is to have the opportunity to play hockey at a collegiate level while pursuing my education goals,” said March. “I love playing hockey and the challenges it brings. I am passionate on the ice and dedicated in the classroom and always push myself to be the best I can be.”